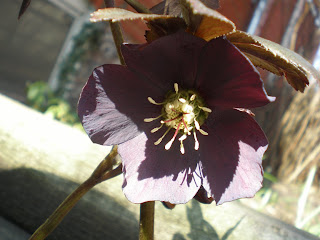 Certain plants seem right at home in Western New York gardens. Some of them I grow and like, but don’t get too excited about: hostas, daylilies, rudbeckia, echinacea. Some I feel happy about growing as successfully as I do: lilium, species tulips, clematis, David Austin roses. And then there are plants that truly surprise and delight me every season. Such a plant is the helleborus, which I first bought after seeing it on the back of a Wayside catalog in 1999 and thinking, “Hmmm, that looks interesting.” 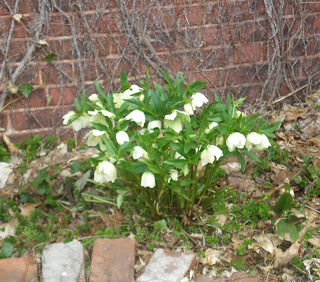 I bought 3 plants, and 2 of them eventually matured. (Or maybe I only got two.) They were meant to be shades of rose and green, but I saw that the more sun they got the lighter they were in color, as the one you see above. I marveled at how they started flowering in late March and how the flowers lasted right into June, followed by lush, sculptural foliage. 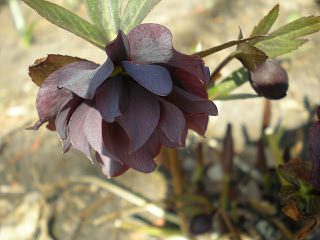 Then, a few years ago, interesting cultivars of hellebore began to appear besides the single-flowered “Lenten rose.” I knew about an earlier-flowering variety (too early) and the helleborus foetidus, and had not been interested, but when I saw the double, and deeper-colored hybrids begin to appear in the Plant Delights, I had to have them. I now have some single and double-flowered mauve varieties and some double pink and whites on the way. These seem to adapt to my garden quite well; all have flowered the first season after late-summer planting, which is more than I can say for those earlier ones from Wayside. 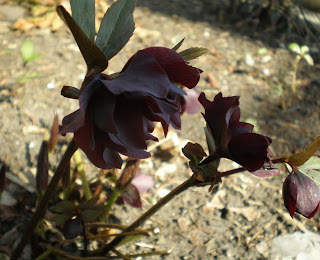 I can definitely see myself becoming a hellebore collector.
Email Post

Lisa at Greenbow said…
Oh yes, I love hellebores. I don't have any of the new dark colors. I will have to seek them out this year. I do have one that has freckles. This one has me on my knees occasionally so I can see those sweet freckles.
12:32 PM

Laura said…
I've been reading about Hellebores in many blogs this spring- I'm also going to have to try them!
1:06 PM

Carol Michel said…
I wish I had more shade for hellebores. I have two now, one white, one mauve, both in full bloom, both looking wonderful. They are worthy of collecting if you have room for them.

EAL said…
Well, Carol, I am now looking for double pinks and double whites. but I will look on your blog to see if your whites and mauves are different than the ones I have.
2:38 PM

Frances said…
Hi Elizabeth, funny that the bloom time of your hellebores is so close to ours, late February to June. Now that is an adaptable plant. I have no doubles, but would like to add those yellow shades of them. The dark Ladies have done well, but I see there are no SEEDS on them! Are they sterile? There are hundreds if not thousands of baby H. orientalis from seeds scattered near and far. I was hoping for those dark colors to enter the gene pool, and doubles if I ever get some. It doesn't look promising.
Frances
4:46 PM

Sheila said…
Hellebores are amazing plants because they elicit so much passion for such a shy plant. So many gardeners love them, like roses or clematis and yet they are so sweet and tend to hang their blooms as if they would prefer to go unnoticed. A very interesting plant!
6:07 PM

Anonymous said…
I just added these beauties to my own garden this spring for the first time. I'm in love already. :)
7:01 PM

Chandramouli S said…
Those dark colored blooms are a pleasant sight! I can see why you dote on them so!
12:46 AM

Anonymous said…
I just bought 12 more hellebores. I can't get enough. Black is definitely the new pink.
4:42 AM

bg_garden said…
I just bought my first Hellebore and I AM ADDICTED!!!! I see in the latest Country Living Magazine that you can use the blooms for floral arrangements?! AMAZING!!!!

ryan said…
Hellebores are great. We plant tons of them because they are pretty much deer proof. Our clients are always unimpressed the first year or two, but then the second winter comes around and they become converts.
2:40 PM

Amy Jo said…
Wow! Those are really interesting and unusually pretty. I might have to plant some here in PA!
2:51 PM

Arizaphale said…
The first photo reminds me of a clematis flower. There looks like there's a lot of variety in these.
4:25 PM

Julie said…
I've never heard of those before!! I guess I only know of the usual "hostas, daylilies, rudbeckia, echinacea". I know what all those are! =D Happy Gardening!!
6:01 PM

Steve said…
Hellebores are definitely an acquired taste, but one that is easy to come by. They seem so muted in color and general tone. But they are truly gorgeous and your pictures have highlighted just that. Very well done.
2:27 PM

Cindy, MCOK said…
If I could grow them here, I would definitely be a collector! The darker ones really speak to me.
11:30 AM

Maggie said…
I am dreadfully late catching up on everyone's BSM...

I have to admit, I have never seen a hellbore before -- but I have been missing out, these are gorgeous!
11:44 PM

Claudia said…
Hi, I'm a transplanted flower from N.Buff. to Amherest. I am anxious to grow hellebores. Monday, Lincoln Park is coming out to get my brand new grounds started. I can't wait!
5:52 PM

Rhonda said…
What a beauty! Hellebore, a great name for an awesome blossom. I'm taking the plunge and starting a garden. You've inspired me. But living in Central Texas will take some planning. Stay tuned!
2:37 PM

Jennifer said…
I love the deep color - perfect! Jennifer
11:06 AM

Lori said…
Can you believe that I'd never even heard of a hellebore till I started reading garden blogs? It never showed up in any catalogues my mom used to get, and you'd think that WI would be a good place to grow'm. Hellebores are definitely on my plant envy list these days.
1:09 AM

ConsciousGardener said…
I don't have one of these...I'm wondering how they would do in the heat of Texas? Beautiful blog!
8:32 AM